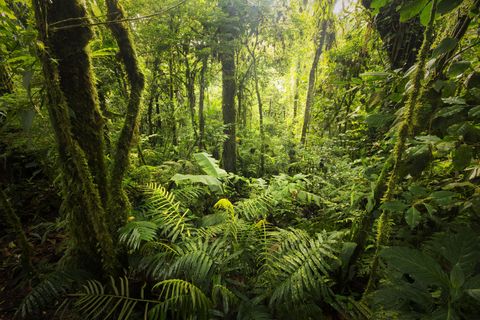 An airplane systems engineer, a shower designer and a biologist walk into a Costa Rican rain forest.

"This is the neatest thing I've found this week," said the airplane engineer, from Boeing, pointing to a cluster of daddy-longleg spiders gently oscillating on the trunk of a banana tree. "There must be some unique muscular elastic element in their legs sensing vibration and amplitude. There could be really important opportunities here for a low-energy sensor or mechanical actuator system."

The group ambled on, stopping next at a 150-ft.-tall ajo tree with weeping vines and thick buttresses—the kind you might see in a natural history museum diorama. "These roots are circumferentially distributed, so the tree's strong in any direction," noted the shower designer, from Kohler. "These buttresses also have a nice gradient to the ground. When we want to reduce stresses in mechanical design, we try to gradually transform one shape into another—nature's already done that here."

This observation—that the natural world has spent 3.8 billion years honing elegant solutions to life's toughest engineering challenges—provides the framework for the growing field of biomimicry. Inventors have long drawn ideas from the world around them. Now, advances in fields like nanotechnology allow them to probe natural processes more deeply. Armed with this insight, and motivated by an interest in sustainable design, engineers increasingly look outside the lab for inspiration.

To develop strategies for converting sunlight into clean energy, some researchers studied photosynthetic bacteria. Others examined how abalones, which build layers of calcium carbonate into extraordinarily strong shells, might lead to a new generation of ceramic composites. Often, the natural model is there all along; it just requires taking a closer look: University of Exeter researchers recently discovered that reflectors used in new, high-emission LEDs serve a nearly identical function as the fluorescent patches on the wings of African swallowtail butterflies.

Boeing sent three of its engineers to Costa Rica's southern Pacific coast to learn how biomimicry might be applied to aviation. The team chose to address a chronic problem with flying: the noise. Sound enters an airplane cabin from various sources—the engine, the air flowing across the aircraft, even the stow bins. Fiberglass blankets in the plane's walls insulate passengers from both the bitter cold outside and some of this noise, but adding more would make the plane too heavy. Eliminating too much noise is also not ideal—consider what it would be like to hear the passengers' every sneeze and cough.

Led by biologists from the Montana-based Biomimicry Guild, a consulting firm that also works with companies such as Nike, Interface and General Electric, the engineers spent a week learning how to, if not exactly find the answer, at least ask the right questions. Thinking outside the standard academic toolbox is not intuitive for most engineers, says Dayna Baumeister, the guild's co-founder. "Putting them in a rain forest brings them back to that childlike state of wonder and suddenly broadens their perspective to other ways problems might be solved."

That principle seemed to be at work the morning the Boeing engineers sat around a picnic table at La Cusinga, a lodge perched spectacularly on a bluff at the edge of a coastal rain forest. Behind them stretches the Pacific, where earlier the group kayaked through a maze of mangrove trees, contemplating desalination strategies.

"Whose survival depends on managing noise or vibration?" Baumeister asked them.

"Parasites living on cicadas," someone answered.

"We have to look at the champion adapters," Baumeister said. "What's their secret? Let's see if we can figure that out." She read an academic paper off her laptop. "This is really cool. Leaf-cutting ants produce high-frequency vibrations with a specialized organ. The high vibrational acceleration of the mandible appears to stiffen the material to be cut."

"So by inducing a vibration into material you can change the physical properties," mused engineer Bill Sanford. "Including conductance, possibly. Why don't we change the conductance of the fuselage by shaping vibration to modify those values?"

The group continued to scan scientific abstracts. Cicadas and some birds, they learn, can actively shape the noise they generate—using mechanisms that could be valuable for managing airplane sound. A finding that bees are able to dampen sound by orienting their honeycomb a certain way proved compelling, too. In airplanes, the honeycomb shape is attractive for its high strength-to-weight ratio and so is used in many interior components. But it is currently oriented in a way that may help propagate sound, rather than deaden it.

One afternoon, the group snorkeled around a nearby reef. Underwater, they heard a popping sound that sounded like a child jumping on plastic Bubble Wrap. The source turned out to be a pistol shrimp, which deters predators by creating and then loudly collapsing an air bubble using a specialized claw. It remains unharmed by the noise, they later learned, because its brain blocks specific frequencies, effectively reducing the sound it perceives—not quite a noise-canceling headphone, but an intriguing strategy.

The outing inspired the engineers to look more closely at fish as well. The discovery that body slime not only helps reduce drag but also reduces the vibrations caused by passing waves had the group riffing on ways to modify an airplane's outer coating to help attenuate sound.

Spiders, which are ubiquitous in the corners of the cabins and on trails around the lodge, also caught the engineers' attention. Research revealed that they weave various thicknesses and levels of tension into their webs—both for structural reasons and so that the vibrations induced by an arriving meal will indicate what and where it is. If Boeing could pinpoint the places on an airplane's panels that vibrate the most, the group reasoned, they could build a complementary dampening structure on those nodes to minimize the vibration coming from them.

As they brainstormed ideas, Baumeister pressed them to consider the fundamental principles behind each natural design. "Does it use benign manufacturing or water-based chemistry? Free energy? Is the system decentralized and distributed, with built-in redundancies?"

While the concepts that Boeing came up with may be far-fetched in the real world of aviation, they are a start. "The difficult part will be making the transition from theory to practice," says engineer Heidi Kneller. "But anything that not only encourages a new way of thinking but also opens up a new world of possibilities is a valuable tool."

All of this biomimicry application came at a good time. At the end of 2009, Boeing's 787 Dreamliner had its first flight. Its gently upturning wings are designed to flex with the air: up to ten feet while in flight. In addition to its shape, unique from past Boeing aircraft, the engineered flex of the 787's carbon-fiber wings can reduce turbulence, cuts down on external noise, and glide through the air—much like that of a bird's wingspan.

On the same trip, two engineers and a designer from Kohler grappled with the more universal, but no less perplexing, conundrum faced by eco-conscious bathers: In a world of water scarcity, how can the indulgence of taking a shower be reconciled with water conservation? The team flipped through animal flash cards—the kind that pair a picture of the creature with an interesting fact about it. They are discussed the ability of whales and dolphins to release millions of tiny bubbles underwater from their blowholes. "Perhaps this unique method of inducting air can supplement water in a low-flow showering application," one of the engineers notes.

After two days the Kohler team made serious headway on designs for a low-flow luxury product. And by the end of the week, engineer Pete Kajuch found himself rethinking the way he approaches design challenges. "Now I reach for a whole new set of inspirations," he says. "I gravitate toward sustainable design first; I don't just reach for the same metal and plastic."

Back at Kohler's headquarters in Wisconsin, a workroom has been filled with ecology books and displays. While the company can't send every design team to Costa Rica, it hopes to re-create the effect of immersing them in a rain forest. After all, it sees the value in biomimicry—and how studying a tropical downpour could actually lead to the perfect shower.

This content is created and maintained by a third party, and imported onto this page to help users provide their email addresses. You may be able to find more information about this and similar content at piano.io
Advertisement - Continue Reading Below
More From About
A Letter From the Editor
R&T Track Club: Grid Discounts and Benefits
Advertisement - Continue Reading Below
The Track Club: Founders Exclusive Deals & Offers
Advertise Online