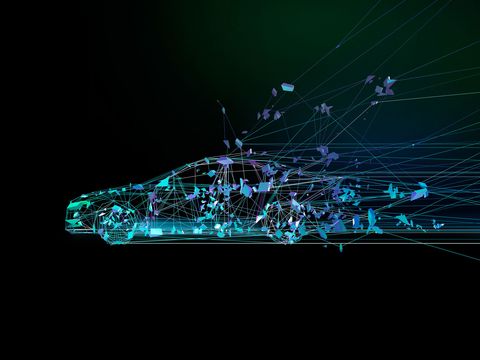 Pair the ubiquity of an Internet connection, at all times and from all locations, with the rise of the autonomous car, and our idea of a connected car can only get more and more advanced. 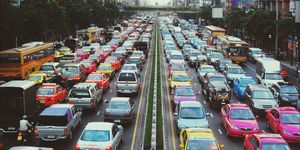 The Road To Fewer Accidents

What is a connected car? The broadest definition is: a car that is connected to something else—either your phone, or your home, or the Internet, or the various cloud services on said Internet. That's the definition set by Andy Gryc, conference director of AutoMobility LA, formerly known as the Connected Car Expo, a convention held before the Los Angeles Auto Show that showcases the latest in-car infotainment technology. A show "where automakers and tech giants and startup communities will come together," said Gryc.

"OnStar was the most advanced connected car, and the only thing it did was handle emergency services."

"15 years ago, I was at OnStar," he told us. "It was the most advanced connected car, and the only thing it did was handle emergency services." Back in the Nineties, OnStar was an innovator in the field of the connected car. Early systems could unlock doors, access turn-by-turn navigation, and help you find an ATM. Now, just about every carmaker has some sort of wireless telematics system: from Mercedes-Benz's COMAND, to Audi's connect, to Ford's SYNC, to Hyundai's BlueLink.

We began to see in-car GPS navigation systems around 1996, while a Wifi connectivity suite became available in 2008. Back then, you could get it in your Avis rental car, or you could pony up $600 and $40 a month to have it in your own. But it didn't take long for high-end carmakers like Cadillac, BMW, and Mercedes-Benz to roll out their factory-installed variants. In a modern-day Audi, for example, you can pull up Google Street View to your center screen and see what your destination looks like before you even get there. Apple's Carplay and Android Auto add much of their respective smartphones' capabilities into this exact center screen: music, maps, phone calls, and voice-dictated text messaging, all on the immediate familiarity of your phone's operating system, and using a standard that's being increasingly supported by more manufacturers. "Phone services that are completely expected: LTE, artificial intelligence, traffic smart nav systems, car apps—we've come an amazing distance in the past 15 years," said Gryc.

That's where the connected car has come from. Where is it going?

One example: imagine if your electric vehicle could sense the road that it's on—its terrain, elevation, any upcoming hills or corners ahead, all linked to satellite navigation—and vary its powertrain to adapt. In theory, it would take advantage of all of this data and run more efficiently, squeezing more range out of its batteries. But it could also direct you to the nearest charging station when that juice runs out. This is already integrated into the navigation systems of most electric cars, along with their respective smartphone apps: Nissan offers such an app for its Leaf, as well as Fiat for its 500e, to name just a few. Their apps can tell you what charge your EV is at, anytime, no matter how far from your car you are. This is helpful. When electric vehicles become more popular, we will run into the problem of how to charge all of them—and by directing you to charging stations, or even minimizing battery depletion, the various benefits of the connected car will manifest themselves even more clearly.

A car has a distinct advantage if it's able to broadcast its speed, steering, and braking ability to other cars nearby. It's the difference between relying on radar to spot trouble—at the mercy of confused sensors, weather, and the complexity of city driving—and actively calculating to avoid potential collisions, alongside other cars that are doing the same. Hand the reins over to the robots and tomorrow's autonomous cars will make vehicle-to-vehicle communication (V2V) integral, all in order to avoid crashing into each other.

Simply networking cars together wirelessly is likely to have a far bigger and more immediate effect on road safety."

"The other cars can use such information to build a detailed picture of what's unfolding around them," according to Will Knight in the MIT Technology Review, "revealing trouble that even the most careful and alert driver, or the best sensor system, would miss or fail to anticipate…simply networking cars together wirelessly is likely to have a far bigger and more immediate effect on road safety."

Potentially, a vehicle could also communicate with traffic lights, barriers, school zones, and other forms of infrastructure. Vehicle-to-everything (V2X) communication has the potential to make driving more efficient: imagine you're coming up to a stoplight, says automotive supplier DENSO. Your car knows that the light, and the two or three traffic lights ahead, are about to turn red. Your car slows down. It knows exactly the right speed to approach to save gas. It knows how long the light will last. Says DENSO: "It can also tell you what speed to drive (under the safest limit of course) to make all the green lights." In that case, it's just doing what we do anyway—to spend as little time sitting and cursing in traffic. In fact,says an MIT study, given sufficiently advanced vehicle communication, who will even need the traffic light?

It can also tell you what speed to drive (under the safest limit of course) to make all the green lights.

Lastly, connecting the car to the smart home has been a possibility fervently discussed. Imagine controlling one's thermostat on the way home from work, for instance, or being able to play music and order products from services such as Amazon's Alexa—Hyundai's Genesis brand claims to be the first car with Alexa integration, with the advent of the 2017 G80. Can you order toilet paper and dish detergent from the comfort of your car? From Ford's SYNC, you can already order a pizza via Domino's, after all, and slather pepperoni grease across your steering wheel.

But this integration won't be easy, said Gryc. There are so many players in the market, and so many diverse standards: "the smart home market is very fragmented right now. it's very difficult to see where that's going to go right now. There needs to be a more dominant player in that space."

A virtual assistant would be a better proposition. And with concierge services that can book reservations at restaurants and hotels, check more times, and

These are common services. Buy a fancy enough car and you'll get them bundled in. The connected car is already here, and you probably knew that already, but for now, it's the promise of the autonomous car that gives it the most possibilities.

This content is created and maintained by a third party, and imported onto this page to help users provide their email addresses. You may be able to find more information about this and similar content at piano.io
Advertisement - Continue Reading Below
More From About
A Letter From the Editor
The Track Club: Founders Exclusive Deals & Offers
Advertisement - Continue Reading Below
R&T Track Club: Grid Discounts and Benefits
Advertise Online