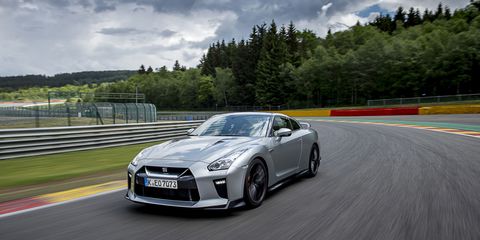 The GT-R tends to polarize people. Dual-clutch gearbox, all-wheel drive, digital everything. Acceleration so glorious, they should name a constellation after it. Get all crossed up, and the chassis will do computerized handstands to save your bacon. Haters call it cheating, even cowardice. Badge loyalists make the Branch Davidians seem apathetic by comparison.

In fairness, said media launch was at Circuit de Spa-Francorchamps, and during a torrential rainstorm. Even on summer tires, the car was basically unflappable. That extra power is spread evenly across the powerband, and the softer suspension setup works beautifully on a wet track. The exhaust, now titanium, sounds boomy if lacking some in character. Power steering (hydraulic, medium feedback) has been slightly retuned and requires appreciably less input at high speeds. Otherwise, the GT-R feels the same as ever. Still a bruiser, still unnaturally adjustable midcorner and relentlessly fast. You don't drive so much as mediate a hair-pulling, crotch-kicking brawl between five million data points and the inconveniences of physics. Maybe that appeals to you. Maybe it doesn't. Either way, this is still the fastest point-and-squeeze car around.

This is still the fastest point-and-squeeze car around.

The difference is how it drives slowly. For 2017, the interior is refreshed with better leather and a smarter eight-inch touchscreen. (Mercifully, the number of physical buttons is more than halved.) There's extra insulation, electronic noise-canceling, and an acoustic windshield, which quiets the cabin a claimed 10 decibels. It seems believable, and the drivetrain is noticeably smoother, especially at low speed. The sounds, as always, recall a pro rally-prepped cement mixer. But the transaxle is no longer vengeful at less than full-thrash—just irritated. According to the engineering team, hardware changes amounted to a revised flywheel damper and some tweaked gear tolerances to reduce lash. Mostly, it makes you wonder why the GT-R hasn't always been this way. So I asked Bob Laishley, the car's program director.

"My predecessors felt that race-car theatrics were very important," he told me, referring to Kazutoshi Mizuno, who abruptly left three years ago. "But now an entire generation has came up knowing this GT-R, and they're getting more mature."

Evidently, the original car's mechanical harshness was largely by design. According to Laishley, Mizuno-san even went so far as to strategically remove sound deadening to enhance gearbox whine. It's clear the GT-R isn't that car anymore; Nissan doesn't want it to be. This year's model is inarguably a better grand tourer, and at no detriment to performance. Whether that stifles its charms is simply a matter of opinion.

Nissan
This content is created and maintained by a third party, and imported onto this page to help users provide their email addresses. You may be able to find more information about this and similar content at piano.io
Advertisement - Continue Reading Below
More From New Cars
Acura Integra Prototype Photos
The 2022 Nissan Pathfinder: Legends Never Die
Created for Created for Created by Hearst Autos for
Nissan
Advertisement - Continue Reading Below
Grid Legends Is a New Docuseries-Inspired Game
2022 Audi RS3 Photos
21 New Cars That Make Crazy Horsepower Per Liter
Jeep Gives the Wrangler 35-Inch Tires, 4.88 Gears
New EV Hummer Will Weigh as Much as Four Miatas
The Porsche Boxster GTS 4.0 Is Basically Perfect
The Flying Spur V-8 Is a Real Bentley
God Help Me, I Love Honda's Automatic Motorcycle