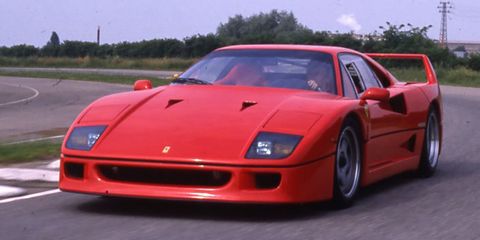 Editor's Note: This article was originally published in the October, 1987 issue of Road & Track. This week marks the 30th anniversary of the F40's debut, so we decided to give you a look back at our first impression of this legendary machine.

Was this to be the 328's more powerful replacement? The long-rumored new 2+ 2 carrying on the tradition of the 412? Another evolution of the superexotic GTO Evoluzione? Or could the top-secret 4-wheel-drive car be ready?

It'll only be a static display, I was told, and there's no hope of driving it at the introduction. Whatever "it" is to be. No matter. I'll be there.

And, indeed, I was. Maranello's ultra-modern if diminutive civic center was filled to overflowing, not to say overheating, with a goodly number of the world's automotive journalists. In glaring focus at its center was a form draped in Ferrari red, the cloth obviously masking a steeply raked windshield and high rear spoiler, but not much more was terribly obvious. Ferrari staff people milled around; for some reason or other, it wasn't quite time to begin.

But then a commotion at the side entrance made it all clear; Enzo Ferrari, the Old Man, a patriarch evidently loved and respected, moved to his central position at the speakers' table amid applause from journalists and company people alike. His walk was stately, slow and not entirely firm, but when he spoke, his voice betrayed none of the frailty that you would expect of 89 years.

"Little more than a year ago," he said through an English interpreter, "I expressed my wish to the engineers. Build a car to be best in the world. And now the car is here."

With that, the red covering was swept aside to reveal another red shape beneath. Applause erupted and, for a time, no words were spoken. Photographers swarmed around the starkly lit car. How can they shoot in this light, I wondered? "Bello, molto bello," I heard a voice say softly. And then I realized that Signor Ferrari's microphone had been inadver­tently left on.

The object of his admiration, the F40 Berlinetta, celebrates 40 years of automobiles carrying the name Ferrari. But it does more than this. Making its formal debut at the Frankfurt show, roughly as you read this, and scheduled for production early next year, the F40 can also be seen as a direct response to Por­sche and its 959.

Not that the cars have much in common—for they don't. What they share, though, is their manufacturers' avowed in­tents of designing, building and selling a tour de force of auto­ motive technology. And, maybe a trifle cynically, I note that Porsche has garnered tremendous publicity from the 959; nor can it be lost on the good people of Maranello that, despite numerous auto-show displays stretching back to Frankfurt in 1983 and a multitude of magazine articles since then, essentially no 959s have yet to reach private hands. (As of this writ­ing, it's said a few have been delivered in Austria; this only because of quirks in that country's homologation regulations.)

"I expressed my wish to the engineers. Build a car to be best in the world. And now the car is here." -Enzo Ferrari

What better time, then, to displace Zuffenhausen's rolling thunder with some of Maranello's own? And this is what the F40 does, in a manner completely consistent with Italian exot­ics. Let's start at the tires and work upward, leaving its most evident feature, its stunning Pininfarina bodywork, for last.

The F40 rolls on Pirelli P700s, ultra low profile 245/40ZR- 17s at the front and 335/35ZR-17s at the rear. The Z rating, of course, signifies that newest category of performance tires de­ signed for the rarefied region beyond Europe's magic 300 km/h (186 mph) and our own super elite 200-plus territory. Nor is this technological overkill, for the F40's maximum speed is given at 201 mph. These tires mount to multi-piece wheels displaying the familiar Ferrari 5-spoke pattern, 17 x 8-in. fronts and 17x13 rears. And, they're fixed to the stub axles via oversize aluminum nuts with safety clips, a la Formula 1.

Befitting a competition heritage, all brake hardware comes directly from Ferrari's Formula 1 sources. Nor is provision made for any sort of automatic intervention; ABS, apparently, is not for F40 piloti. Yet more telling, the F40's brakes are not even power-assisted. But in praising the enhanced feel of a non-boosted pedal. Ferrari engineers also cite pedal pressures compatible to those of servo-equipped systems.

The suspension is typical Italian exotic, which is to say, a completely conventional layout superbly executed. Front and rear, there are tubular unequal-length A-arms, coil springs surrounding Koni shocks and an anti-roll bar. One concession to fashion is adjustable ride height, the F40 lowering itself auto­matically at high speed and allowing itself to be raised beyond normal ground clearance for driveway maneuvering.

Dimensionally, the F40 is a tad larger than the GTO and a bit smaller than the Testarossa. Its 174.4-in. overall length, for instance, compares with 168.9 and 176.6 in., respectively. Its width, however, is de rigueur exotic-car impressive, at 78.0 in.

A rather low curb weight of 2425 lb suggests the use of inno­vative lightweight materials, and this is very much the case. In fact, the car's most significant technical achievement lies in this very area.

Its chassis begins conventionally enough, with large diame­ter steel tubes defining powertrain and suspension attachment points. But in lieu of steel box sections forming the rest, there are moldings of advanced hybrids, Kevlar and carbon compos­ites, bonded to the tube frame with structural adhesive. Some are essentially box sections selectively reinforced to counter regions of high stress. Others are artfully molded to an extreme. The front tub with its integrated spare-tire well, for one.

The bodywork's outer skin is of composite material as well. According to Ferrari engineers, chassis weight is reduced by 20 percent; strength is increased three-fold through use of this technology. Engineers stress, though, that these materials are still best suited to extremely small volumes of production; i.e. fabrication of the rear deck lid is said to take three days.

Beneath this rear deck, visible through the louvered back­light, lies one of the more familiar aspects of the F40, its twin-turbocharged longitudinally mounted 3.0-liter V-8. Derived from the GTO Evoluzione, this powerplant is said to display a dual personality, docile yet extremely powerful. And certainly the latter it is, claiming 478 bhp DIN at 7000 rpm and 425 lb-ft of torque at 4000.

Ferrari's chief press officer, colleague and friend, Dr Luca Matteoni, assured us we'd have ample opportunity to con­firm these figures in time, when the first F40 arrives on our side of the water. And, despite earlier rumors, arrive it will. Plans are afoot to enlist the aid of a highly regarded specialist in after­market compliance and put together a combined factory/inde­pendent effort.

No more than 400-450 cars will be built in total, and you can bet that more than a few are already accounted for. A price of approximately 250 million lira has been quoted; figure just under $200,000 for those select and, evidently, well-heeled U.S. few.

No doubt, the engine's dual personality will help in its U.S. certification. Its fuel injection, for example, is an innovative sequential, phased electronic system. A special feature is its 8-butterfly intake manifold working on what Ferrari terms the alpha/N approach: Rather than measuring mass of flow, this system gets its primary input signals from the butterfly angle, alpha, and engine speed. A turbo pressure signal fine-tunes the amount of fuel delivered to 16 injectors, two for each port.

Four valves per cylinder are actuated via thimble-type tap­pets and dual overhead camshafts per bank. The compression ratio is a conservative 7.8:1. This no doubt reflects the poten­tial boost of the dual water-cooled IHI turbos feeding through dual air-to-air intercoolers and a wastegate that would look right at home in an F1engine bay. Also following F1 practice is a knock-sensed interaction of fuel, turbo boost and electronic ignition (a Weber-Marelli system using four ignition coils).

Power travels through a hefty 8.5-in. double-plate clutch to a 5-speed gearbox complete with its own oil radiator. Actually, two different gearboxes are available; one with normal syn­chronizers, the other dog-clutch crash box "for those who want to feel like piloti," as one engineer put it.

And, as you'd expect, said piloto gets a proper environment, a blend of handsome materials arranged for pure function. Nothing here would surprise those who have seen a Ferrari interior: There's that lovely steering wheel, sturdy shift gate and a shrouded set of large legible instruments. Need I mention that the last named are purely analog?

A few special touches set the F40 apart, though, even from its Maranello siblings. Its pedals are of the oversize racing vari­ety: its side windows have race-car sliding glass; and its seats with full competition harnesses are extremely form-fitting. In­deed, so much so that three different sizes can be specified, best to meet the owner's physiology.

This brings me to the last element of the F40, my favorite: its exterior shape. Pininfarina is said to have done it in remarkably short time. Deft and firm strokes of a master, I say.

The F40 is at once recognizable as a Ferrari, yet it sets a new pattern for future designs. Less curvilinear than many current cars, its surface development is subtly planar. The GTO Evoluzione shares some of its lines; but not its overall feel. And whereas the Porsche 959 is organic and opulent, the F40 is honestly mechanical, make no mistake about it.

Its pedals are of the oversize racing vari­ety: its side windows have race-car sliding glass.

"Designed with emotion" is a phrase that came up in Maran­ello. But emotion didn't compromise a Cx in the 0.34 range, quite good when one considers that front and rear lift are also commendably low. Nonetheless, it's the shape that excites me, not its aerodynamic properties.

Notice the lovely tautness of its front fenders and how they merge with the hood that, in turn, blends into the windshield. I think the rear three-quarter view is especially strong, with the spoiler shape echoing that blacked-out rectilinear grille. To my eyes, the only shortcoming is an overly busy collection of shapes around and to the rear of the main side scoops. Even here, though, I like these tight surfaces when viewed from the front three-quarters. And you?

To put the F40 in perspective, recall how jarring the Testarossa first looked (and, for that matter, even in full familiarity how it still has some rather bizarre angles). By contrast, the F40 looks immediately right. And it looked all the more so as it whooshed down Fiorano's main straight at full chat.

Whooshed? I thought the Ferrari invitation said all the pho­tography would be static?

Yes, but you've got to recognize the wonderfully interactive manner in which things get done in Italy. Something that is at first molto difficile has a way of later turning into maybe and ultimately coming to pass. All with that priceless national trait, the art of improvvisazione.

This content is created and maintained by a third party, and imported onto this page to help users provide their email addresses. You may be able to find more information about this and similar content at piano.io
Advertisement - Continue Reading Below
More From First Drives
The Flying Spur V-8 Is a Real Bentley
The 2022 Porsche 911 GT3 Is More Focused Than Ever
Advertisement - Continue Reading Below
Drew Magary Reviews the 2021 Toyota Sienna
The 2022 Acura MDX Is Refreshingly Sporty
The Urus Is Lamborghini's Moneymaker
Ferrari Roma: First Drive
The 2020 Audi SQ8 Is an Everyday Muscle Truck
The Nissan Titan Is an Ultimate Utility Vehicle
Polestar 2: A Great Sport Sedan That's Also an EV
The McLaren 620R Is the Son of Senna