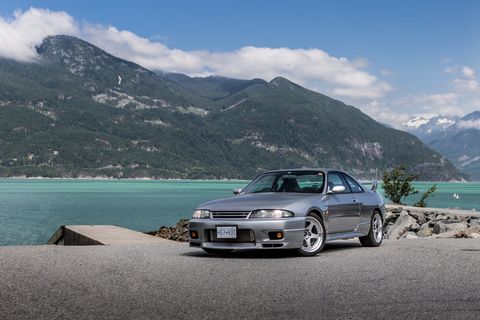 Tokyo Drift. The 996-chassis Porsche 911. The third Jonas brother. Every dynasty has a weak link, and as the Nissan GT-R celebrates its 50th year, common knowledge will tell you that the R33 is the worst of the breed, a fat and lumpy branch on the Skyline family tree.

Common knowledge can get bent.

Punt the R33 GT-R down a curving highway on-ramp, spool up the turbos, and find the truth. The R33 has too long been castigated by specification-obsessed, automatic-Sentra-driving keyboard warriors. It isn't just better than you'd expect, it might well be the high point of GT-R heritage.

Much like the NC Miata or perhaps the 996 Turbo, the R33 falls into an uncanny valley, bookended by better-known cars. The R32 GT-R that preceded it is the raw, touring car battler with a case full of trophies. The R34 is the handsomer offering, with movie star good looks and the absolutely bonkers Z-tune variant at the top of the range.

Whereas the R33 is... well actually, it's both. It's softer and more comfortable than the R32, while simultaneously having a credible racing history that the R34 can't match.

An R33 held the production car lap record at the Nürburgring, the first car to crack the eight minute barrier. It wasn't some factory ringer, either: BestMotoring took a stab at recreating the lap and managed a very close 8:01.72. At the 1995 running of the 24 Hours of Le Mans, a Nismo-fielded R33 finished in the top ten overall, beating Ferrari F40 LMs and McLaren F1 GTRs.

It was an R33 variant that broke the "gentlemen's agreement" between Japan's automakers, limiting horsepower to 276. The R33 was also the only GT-R to be officially available with four doors, and spawned both a bananas homologation special and something even more tasty. But more on those later.

This one is a 1996 R33 GT-R V-Spec in N1 trim. That last bit means that the car's 2.6-liter twin-turbocharged straight-six is stronger everywhere, from piston lands to cylinder head, with improved oil cooling, an uprated water pump, and metal rather than ceramic turbines in the turbochargers. The original N1 was only available in white and came with no radio or air-conditioning, being roughly analogous to a 911 GT3.

The owner of this car, Alex Lee, also owns an R32 GT-R, which he bought back when prices were affordable thanks to Canada's 15-year import law. He's gradually brought the R32 back to stock in an attempt to get collector plates on the car, and his R33 is likewise mostly stock-looking. The wheels are period-correct for the car, and the engine upgrades can be traced back to Nismo's Ōmori factory—mecca for Nissan fans. Lee didn't buy his car because he couldn't find an R34; he specifically wanted a '33, and spent considerable time hunting for the right one.

Simply put, this car rips. Its straight-six feasts on revs, screaming all the way to its 9000rpm redline. Some years back, I drove a Mk IV Supra Turbo on these same roads, and by comparison the R33's heavyweight reputation feels undeserved. The Supra is a grand tourer with big boots. The R33 is just a more polished version of the R32's track-focused brutality.

Yes, this is the longest and heaviest GT-R, but it's not bulky. Compared to the R32, the R33 featured considerably improved aerodynamics—specifically, reduced front-end lift at speed—and a much stiffer chassis. It also benefitted from a comprehensive lightweighting campaign aimed at improving the weight distribution. An R32 has 60/40 front-rear weight distribution, where the R33 is 55/45. Further, much of that weight was moved to the center of the vehicle, reducing polar momentum.

Power was officially the same as the R32, at 276 hp, but that was just a bit fat lie. Figure around 330 hp or so, with double that possible if you want to start wrenching. To get the power down, the '33 had an upgraded version of Nissan's ATTESA all-wheel-drive, with V-Spec models getting an active limited slip out back. With the HICAS four-wheel-steering now equipped with a yaw sensor, the R33 was far easier to take right to the limit. With hardly any additional power and an extra 100lbs of tech to haul around, the R33 was still some 20 seconds faster around the Nordschleife.

Better yet, the R33 feels like its siblings. It's unmistakably a GT-R—in sound, in its rev-hungry small-displacement six, in steering feedback. Yes, it's smoother than the '32, and perhaps not quite as darty as the shorter-wheelbase R34, but Lee's R33 feels very special from behind the wheel.

As mentioned, you could get your R33 in varying degrees of hardcore, with the N1 being the most raw. There were rarer variants, too, like the Nismo-fettled N400R. This one saw Nissan drop the pretense of the 276 hp max power rating and admit that 400 horses were underhood. They only build 44 of them. However, the rarest R33 also happens to be the rarest GT-R ever made.

With Group C racing off the table owning to regulation changes, Nissan decided to try their hand at the top-level GT1 class, including a tilt at Le Mans. In order to pass homologation rules, a single road-going example was required to be built, matching the race cars. You can find it tucked away at Nissan's Zama heritage garage, a shocking 50mm wider than the standard car.

The R33 is just about to hit 25 years old, making it legal to import into the US, but it may take some time for the market for this model to match the frenzied appetite for the R32. Trust me: you're going to want to get in on the ground floor here, and not just as a stop-gap while you wait for your dream R34.

Every dynasty has its bright spots and its dark horses. The '33 is emphatically the latter. Let the keyboard jockeys sneer over their virtual Gran Turismo garages. The R33 GT-R might be overlooked, but it's a gem.

Let's suppose you love the Nissan GT-R, but also need to haul your dog around. Good news, everyone! There's an R33 that'll let you laminate a Shiba Inu to its rear hatch with every kick of the throttle.

The Nissan Stagea 260RS isn't a true Skyline GT-R, but it does have the heart and claws of one. Autech, a Nissan subsidiary responsible for specialty vehicles, took the Stagea station wagon and fitted the complete R33 driveline, including the ATTESA all-wheel-drive.

The result is absolutely ridiculous: a full-sized wagon with a twin-turbocharged engine that's happiest somewhere north of 7000 rpm. Converting the front end to resemble an R34 GT-R is a popular modification, but the Stagea is most closely related to the '33.

With a massive trunk and folding rear seats, the 260RS is Godzilla for groceries. It's also further proof that the R33 is the enthusiast's choice in the GT-R range.

Brendan McAleer
This content is created and maintained by a third party, and imported onto this page to help users provide their email addresses. You may be able to find more information about this and similar content at piano.io
Advertisement - Continue Reading Below
More From Vintage
Toyota Will Sell New Parts for Old Supras
This Ferrari 330 LMB Replica Is No Restomod
Advertisement - Continue Reading Below
The Fairlady Z432R Is the Most Valuable Z
Buy This Ex-F1, Ex-Lady Gaga Alfa Romeo Spider