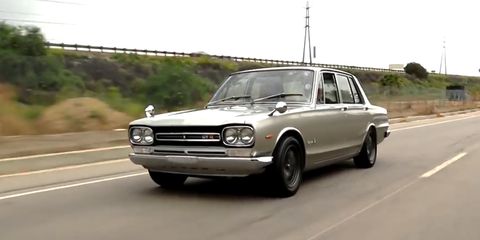 The Nissan Skyline GT-R is thought of as a two-door, but this legend actually started as a humble four-door sedan back in 1969. It wasn't until 1971 that the more familiar coupe arrived, and Nissan stopped building four-door GT-Rs altogether. With a little over 800 built, that makes this four-door GT-R one of the rarest, and coolest, ever built.

You could even think of this as Japan's take on a muscle car—a practical family car with a (relatively) big engine. No, the GT-R didn't have a V8, but it did have a masterpiece of a straight-six—a 2.0-liter that made around 160 horsepower when new. And unlike most muscle cars, the original GT-R handled, proving its worth on the race tracks of Japan with countless victories.

Perhaps we should instead think of the original GT-R as a precursor to the BMW M5—a subtle sports sedan, with sports-car beating performance. The original GT-R was a car nearly 20 years ahead of its time.

However you want to classify it, though, the original GT-R is great. Jay Leno finds that out for himself behind the wheel of a gorgeous 1969 example for sale at Original Rare in Orange County. The engine is especially impressive, with great top-end performance and a raspy sound to die for.

These early cars are among the most desirable of all GT-Rs, and it's easy to see why. Unfortunately, only 831 were built and far fewer survive. So if one like this comes up for sale, you know what to do.

This content is imported from YouTube. You may be able to find the same content in another format, or you may be able to find more information, at their web site.
This content is created and maintained by a third party, and imported onto this page to help users provide their email addresses. You may be able to find more information about this and similar content at piano.io
Advertisement - Continue Reading Below
More From Vintage
Toyota Will Sell New Parts for Old Supras
This Ferrari 330 LMB Replica Is No Restomod
Advertisement - Continue Reading Below
The Fairlady Z432R Is the Most Valuable Z
Buy This Ex-F1, Ex-Lady Gaga Alfa Romeo Spider